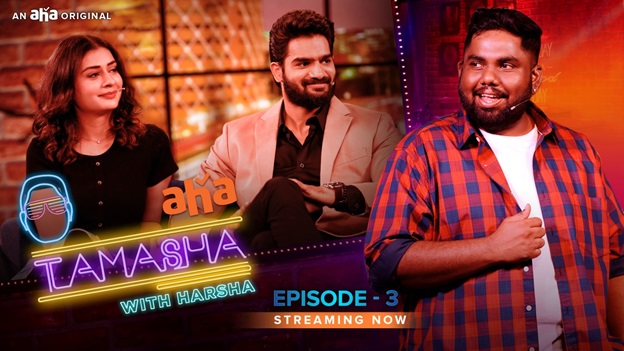 With the increase in drama content, people tend to lose interest in them gradually. With the introduction of OTT platforms, people like to explore new genre shows now. So, do you get confused about choosing the right show that will make you laugh and be entertained? Are you looking for such a show in the Telugu language?

Here is the best solution for you. Download the Aha app on your mobile or laptop to enjoy uninterrupted and unlimited shows from different genres and styles in Telugu. This platform offers high-resolution quality movies or web series to watch online. To begin with, you check out the most streamed and top-rated comedy talk show of this platform, that is:

HarshaChemudu, also known by his screen name ‘Viva’ Harsha, is an amazing Indian actor and comedian who works specifically for the Telugu film industry. With his beginning of the career in a viral web series called ‘Viva’ on Youtube, the comedian gained recognition all across the country.

Tamasha with Harsha is a comedy talk show that premiered on the best OTT platform, the Aha app. As suggested by the name, the show is hosted by none other than comedian-actor Harsha. The show is directed and produced by the host Harsha himself. The first episode of this talk show was released on 6 November 2020 on the Aha app.

In this show, Harsha invites celebrity guests from the film industry and other professional platforms to roast them with his funny antics and sarcasm. The show will give you a laugh-out-loud dose of tamasha with his hilarious jokes and comic acts. Harsha delivers a high-energy performance to keep his viewers engaged throughout the episodes. The first episode of his talk show featured Niharika and Navdeep from the film industry. They were equally reciprocating with the acts and roasting session to show a complete entertainment package for the viewers.

To be precise, the show invites celebrity guests in the show. Harsha asks them to sit on their chairs and starts the show with a round of applause. The host begins to interact with the guests about a few details from their personal or professional life. After warming up the communicative session, he starts roasting them with his funny antics and sarcastic comments. The guests reciprocate too. They try to counterattack with roasting acts too. With practical and entertaining jokes, they make the audience laugh-out-loud. The show also organizes some funny actions and challenges for the guests that will automatically bring a smile to your face. In the end, Harsha spreads positive vibes along the set to encourage a sporting spirit among the audience and guests. Overall the show is perfectly managed and created by Harsha.

If you want to explore guests’ names and the funny act performed with them in the remaining five episodes of this show,on the aha app now. Enjoy this funny show to boost or enhance your mood while relaxing back at your home.